Have you ever checked into a hotel that you booked on line, entered the room, and been so grossed out that you turned around and left?  That’s what just happened to me at Safari Inn.

So here’s the back story (isn’t there always a back story with me?!).  I’ve decided to take an early retirement (11/2015 can’t get here soon enough!), and I’m looking for a new location for my “writer’s cave.” I’ve got to get away from the hustle and high prices of Silicon Valley and am seriously considering Oregon/Washington area.  I know, I know… “it’s too cold there… it rains all the time there.”  That’s precisely what I want!  I’m the daughter of a Canadian – whaddya expect, eh?  Anyway, I was already planning to take a week off to go to the Public Safety Writers Association conference in Las Vegas, and I thought, “what the hell, I’ll take an extra week of vacation and go about 700 miles out of my way and check out the Portland, Oregon / Vancouver, Washington communities.”  Along the route that I planned on taking up through Oregon, there’s an animal park that I thought I’d like to check out –Wildlife Safari – in Winston, Oregon.  I checked out hotels on line for the Winston area and settled on Safari Inn.  Big mistake…

Perhaps I should have known that something was wrong when my GPS couldn’t originally find the address.  But I persevered and arrived (“Your destination is on the left”) Well, sure enough, there’s a cute hotel on my left, but it’s called the Wildlife Inn… not Safari Inn.  Figuring they’d changed their name being so close to the Wildlife Safari, I went to check in.  Nope, no reservation here.  They kindly directed me down the street to the Safari.  As I pulled in, my heart sank.  It put the Ug in Ugly.  But whatever.  Yes, they had my reservation.

When I went to the suspect stairs to go up to the second floor, there was a spider on the railing.  I really have this thing about spiders.  Gross.  I got into the room, and the spider was forgotten.  What’s the word I’m looking for… dump? No, that’s too classy.  The room was filthy – I won’t dwell on the details because I’ll just get irritated again.  There was one queen bed, and a table sat where another bed had obviously been – they hadn’t even bothered to take the headboard off the wall.

Now, I had only stopped once for gas on my eight hour drive but had gone through four 16-oz. bottles of water.  You know which room I needed in that hotel.  To my dismay, the bathroom was beyond disgusting.  No exaggeration… there was blood and other stuff on the toilet seat.  I had to go so badly by this point that my eyes were probably turning yellow, so I used my bottle of hand sanitizer to clean the seat.  With that urgent business handled, I looked in the shower.  It wasn’t the worst shower I’d seen, but I didn’t have enough hand sanitizer to be able to take a shower in that thing. 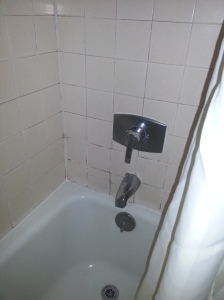 Moldy Shower at the Safari Inn 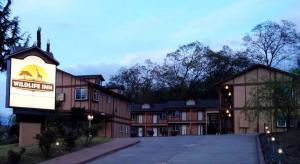 I pulled out my phone and looked up the number for the Wildlife Inn and begged for a room.  I couldn’t get out of the Safari Inn fast enough.  So here I am now, sitting in an absolutely adorable room at the Wildlife Inn done up in an African wildlife theme (the room, not me).  Check out their website: www.wildlifeinn.com to see pictures of the rooms.  This is a family business, and I must admit to being completely charmed by them.  They’ve put a lot of hard work into this inn, and it shows.  I am so happy I left the other hotel and moved over here.

2 thoughts on “The Hotel Swap”