On Saturday, August 9, I had the most incredible day. I spent five hours with California Survival School in the Saratoga woods. I wasn’t sure what to expect before going up there, but the day was better than what I had imagined.

Anyone who watches Survivor would probably know that the four basic items that a person needs to survive in the wilderness are food and water, fire and shelter. Prior to going to the Core Survival Skills Class, I thought that water would be the first priority, with fire a close second to sterilize the water. I was wrong.

That jingle was the first lesson of the day. Why is shelter a more imminent need than water? Because the body can go three days without water, but hypothermia/hyperthermia can occur in a much shorter time. In extreme weather, a person can succumb to the elements within hours or even minutes.

So what constitutes shelter? It can be as simple as clothing or as complicated as a structure. When considering a structure, some questions need to be carefully considered: What are the harmful weather elements (cold, heat, wind, rain, snow, etc)? What elements of the terrain could be dangerous (rising/falling tides, falling trees/branches/rocks/debris)? Are there animals/insects/plants (poison oak!) that could hurt you or make you sick? What materials are available? The answers to these questions (and this is not an exhaustive list of questions, by the way) will help you decide on the type of shelter you need and where to position it. 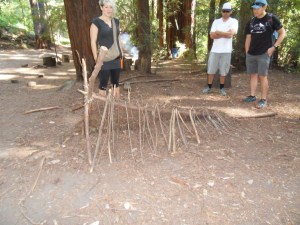 Our instructors showed us a very basic but easily built shelter that will keep out the cold and protect from other elements. This is an example of a half-built shelter so you can see the structure. Note the duff (Webster defines duff as partly decayed organic matter on the forest floor) on the “floor” of the structure. It is vital to place a thick layer between your body and the ground since the ground will sap more of your body heat that the outside air.

The class was broken up into two groups, each was to make one shelter that would fit one member. We had one hour to figure out how to build the shelter, where to put it, gather supplies from the surrounding woods, and put the thing together. The other team chose to use vines to tie their opening together. 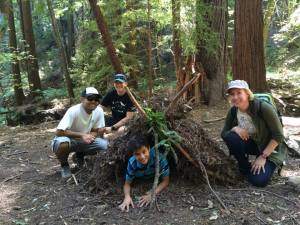 However, I cheated. During my search for supplies, I found some discarded twine. I have no problem using anything I was able to salvage. We also decided to use a tree to stabilize the structure, rather than making the X like the other team did. It ended up taking us just shy of the allotted hour, and I was amazed at how comfortable the shelter was.

Next on the agenda was water. We learned about diseases and parasites that can make you sick if you drink unclean water. (Having had a dog that got giardia from drinking from a stream, I take water-borne parasites seriously!) We were situated near a creek, so water supply was a simple matter. However, what if you have nothing in which to boil the water? We were shown how to make a bowl out of a log – pure genius! We didn’t get to actually make one since it would have taken too much time, but we did get to use it. Because the bowl was made from wood, we couldn’t put it directly on the fire to boil the water. We learned how to boil the water using hot rocks. Oh – a word about rocks – choose with care! Did you know that if you take a rock from a river and put it in a fire, it can explode? The water that has seeped inside it expands at such a quick rate that the shrapnel from the rock can do serious damage to anyone/thing in its path. I can see a mystery story plot point developing here…. 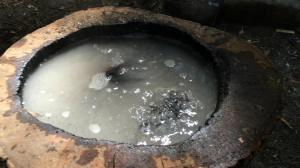 After water, we moved on to foods, even though fire is next on the ‘sacred order’ because fire can take a long time to teach. I’ll write more about food and fire in my next post. In the meantime, I strongly suggest that you contact California Survival School to take some classes in wilderness survival. This was the core class, and I’m eager to try my hand at the next level.